Abu Simbel is a historic site comprising two massive rock-cut temples in the village of Abu Simbel (Arabic: أبو سمبل), Aswan Governorate, Upper Egypt, near the border with Sudan. It is situated on the western bank of Lake Nasser, about 230 km (140 mi) southwest of Aswan (about 300 km (190 mi) by road). The twin temples were originally carved out of the mountainside in the 13th century BC, during the 19th Dynasty reign of the Pharaoh Ramesses II. They serve as a lasting monument to the king Ramesses II. His wife Nefertari and children can be seen in smaller figures by his feet, considered to be of lesser importance and were not given the same position of scale. This commemorates his victory at the Battle of Kadesh. Their huge external rock relief figures have become iconic.

The complex was relocated in its entirety in 1968 as part of the International Campaign to Save the Monuments of Nubia, under the supervision of a Polish archaeologist, Kazimierz Michałowski, from the Polish Centre of Mediterranean Archaeology University of Warsaw on an artificial hill made from a domed structure, high above the Aswan High Dam reservoir. The relocation of the temples – together with other temples which run from Abu Simbel downriver to Philae including Amada, Wadi es-Sebua, and other Nubian sites – was necessary or they would have been submerged during the creation of Lake Nasser, the massive artificial water reservoir formed after the building of the Aswan High Dam on the River Nile. The Abu Simbel complex, and the other relocated temples, are part of the UNESCO World Heritage Site known as the “Nubian Monuments”.

Ancient settlements Remains of a circular Roman tower at Babylon Fortress (late 3rd century) in Old Cairo The area around present-day Cairo had long been a focal point of Ancient Egypt due to its strategic location at the junction of the Nile Valley and the Nile Delta regions (roughly Upper Egypt and Lower Egypt), which […] 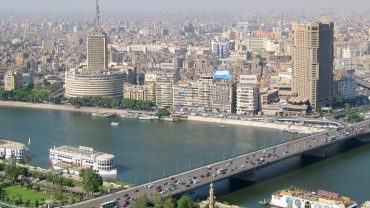 Cairo is the capital of Egypt and the city-state Cairo Governorate, and is the country’s largest city, home to 17 million people. It is also part of the largest urban agglomeration in Africa, the Arab world and the Middle East: The Greater Cairo metropolitan area, with a population of 21.9 million, is the 12th-largest in […]