Explore attractive sightseeing such as the great Pyramids, giant Sphinx, the Valley Temple and the Egyptian Museum. You will also discover Philae Temple, the High Dam, the unfinished Obelisk, the Valley of the Kings, Queen Hatshepsut Temple, the Colossi of Memnon, El Azhar; the first Islamic University and Al Mouayyed Mosque.

Welcome to Cairo, Egypt (Around The Clock)
Ancient Egypt Tours representative will pick you up from Cairo International Airport by the exit door, holding a sign "Ancient Egypt Tours with your name written on it"will meet & assist you at Cairo International Airport (Arrival procedures) and then he will escort you to the hotel by exclusive air-conditioned deluxe vehicle. At hotel the tour manager will assist with a smooth check-in and review your holiday itinerary with you to establish and confirm pick-up times for each tour.

Breakfast at your hotel in Cairo and then met your personal guide who will accompany you to Giza Plateau to visit one of the seven wonders of the ancient world The great Pyramid of Khufu’s (Cheops),3 small pyramids You will continue to explore the rest of Giza plateau including the sight of Khafre’s (kaphren) pyramid - Khufu's son, the second-largest pyramid on Giza site,, the remains of the funeral temple, the pyramid of Mankawra( Mykerinus) and 3 small pyramids. Then proceed to visit the Great Sphinx, the head of a pharaoh with a lion's body, which dates from the time of Chephren; the tour also includes a visit to the Valley Temple, which belongs to the pyramids of chefren This temple served definitely two functions: First, it was used for the purification of the mummy of the king before its burial. Second, it was used for making the Mummification process of the king. After visiting the pyramids, you'll then continue across the plateau for a photo opportunity of the three pyramids rising from the sands, with the Cairo skyline in the background. Proceed to have your lunch at local restaurant
Then Move to visit The Museum of Egyptian Antiquities, known commonly as the Egyptian Museum, in Cairo, Egypt, is home to an extensive collection of ancient Egyptian antiquities, and dates back some 5000 years of art which is considered the largest most precious collection of Egyptian art in the world. Over 250,000 genuine artifacts are presented, with a representative amount on display, the remainder in storerooms, The Egyptian Museum which is filled with thousands of Pharaonic artifacts, including the golden treasures of King Tutankhamen. Fascinating objects such as jewels, headdresses, alabaster vases and toys from ancient Egypt are all on display, and many priceless statues and other artifacts can also be seen which was enclosed in his tomb for over 3,500 years before it was discovered in the 1922s when his tomb was excavated, The Egyptian Museum is one of the first stops on most people’s itineraries when travelling to Egypt. This distinctive museum that houses a vast store of priceless objects, from earlier time to the Greco Roman period is worth seeing.
Transfer to the train station for your overnight Sleeper train to Aswan. Dinner on the train.

After having breakfast on train, our representative will meet & assist you then transfer to your hotel in Aswan. Free day in Aswan.
Optional Tours:

After having your breakfast at your hotel, our representative will transfer you to board your 5 star Egypt Nile cruise before lunch, after your lunch you will begin your Aswan tour by a visit to the High Dam, An engineering miracle was constructed between 1960 and 1970. It aimed to increase economic production by further regulating the annual river flooding and providing storage of water for agriculture, and later, to generate hydroelectricity. The dam has had a significant impact on the economy and culture of Egypt, and then move to the Unfinished Obelisk, This obelisk is believed to belong to Queen Hatshepsut, one of the rulers of the 18th dynasty and the royal wife of king Tuthmosis II. The unfinished obelisk is the largest known ancient obelisk, located in the northern region of the stone quarries of ancient Egypt in Aswan, Egypt. It is unknown which pharaoh created this structure. It is nearly one third larger than any ancient Egyptian obelisk ever erected. If finished it would have measured around 42 m and would have weighed nearly 1,200 tons. Then move to the beautiful located Temple of Philae on Isis Island and the Granite Quarries, which is dedicated to the goddesses Isis and Hathor. Dinner on board

Sail to Kom Ombo, Afternoon Tea, The Temple of Kom Ombo standing on high grounds overlooking the Nile, the Temple of Sobek and Haroeris in Kom Ombo (also known simply as Kom Ombo Temple) dates from about 180 BC during the Ptolemaic era, with additions made into Roman times. The temple at Kom Ombo was also built at this time, under Ptolemy VI. Since this bend in the Nile was a favored spot for crocodiles to bask in the sun and threaten locals, it is natural that the temple would be dedicated to Sobek, the crocodile god. But it is unusual in having a double dedication: it also honors Haroeris, a form of the falcon-headed god Horus. The hypostyle halls were added under Ptolemy XIII (51-47 BC); the Roman emperor Trajan (53-117 AD) added the forecourt and outer enclosure walls, Sail to Edfu, Dinner on boar, Visit the majestic temple dedicated to Horus. The Edfu’s Temple is the second largest temple after Karnak. Which was known in Greco-Roman times as Apollonopolis Magna, The temple was dedicated to the falcon God Horus and was built during the Ptolemaic period. Sail to Luxor, Afternoon Tea, Dinner on board & Galabya party

Breakfast on board. Cross to the West Bank to visit to Valley of the Kings the Valley of the Kings was created and used from approximately 1539 BC to 1075 BC. It contains some 60 tombs, starting with Thutmose I and ending with Ramses X or XI. The official name of the site was The Great and Majestic Necropolis of the Millions of Years of the Pharaoh, Life, Strength, Health in The West of Thebes, or more usually, the Great Field. The most famous tomb is KV62, the Tomb of King Tutankhamun. The discovery of King Tut’s tomb was made by Howard Carter in 1922; Tutankhamun’s tomb was the first royal tomb to be discovered that was still largely intact. you will visit 3 tombs, You will continue to explore then transfer to the Mortuary Temple of Queen Hatshepsut at El Deir El Bahary, Queen Hatshepsut was the first great woman in recorded history: the forerunner of such figures as Cleopatra, Catherine the Great and Elizabeth I.The Mortuary Temple of Hatshepsut is the focal point of the Deir el-Bahri complex of mortuary temples and tombs located on the west bank of the Nile, opposite the city of Luxor. Hatshepsut was female pharoah. Her temple, this temple was built on three surfaces take the form of balconies, devoted primarily to the worship of the god Amun, and to perform funeral rites for the queen known as El Deir El Bahary, And Proceed to the two colossal statues of Amenhotep III, Colossi of Memnon are the two massive stone statues of Pharaoh Amenhotep III. For 3,400 years they have sat in the Theban necropolis, across the River Nile from the city of Luxor. The original function of the Colossi was to stand guard at the entrance to Amenhotep’s memorial temple or mortuary temple.Excursion to the Temples of Thebes, on the Eastern bank. Crossing the Nile, You will continue to explore then transfer The Karnak Temple, the largest place of worship ever built. In ancient Egypt, the power of the god Amun of Thebes gradually increased during the early New Kingdom, and after the short persecution led by Akhenaten, it rose to its apex. In the reign of Ramesses III, more than two thirds of the property owned by the temples belonged to Amun, evidenced by the stupendous buildings at Karnak. Although badly ruined, no site in Egypt is more impressive than Karnak. It is the largest temple complex ever built by man, and represents the combined achievement of many generations of ancient builders. The Temple of Karnak is actually three main temples, smaller enclosed temples, and several outer temples located about three kilometers north of Luxor, Egypt situated on 100 ha (247 acres) of land. Karnak is actually the sites modern name. Its ancient name was Ipet-isut, meaning "The Most Select (or Sacred) of Places" Lunch on board. Afternoon free at leisure, Afternoon Tea, Dinner served on Board.

Having breakfast on board before disembarkation, our representative will transfer you to Luxor train station to catch you first class sleeper train to Cairo, Dinner served on board.

Breakfast on train. Arrival Cairo, and our representative will meet & assist you and head to old Cairo to visit El Azhar; the first Islamic University. Then continue to Al Mouayyed Mosque, Bab Zuweila the best preserved gate from the 7 old gates in Cairo, transfer back to your hotel in Cairo.

Breakfast, Ancient Egypt Tours representative will pick you up from your hotel in Cairo, then drive to Alexandria by A/C car, We will drive almost 210 kilometers to Alexandria City, the second largest city in Egypt known as “The Pearl of the Mediterranean. Visit to the Montazah palace and Gardens (We will drive by the Bibliotheca of Alexandria with the possibility to stop for a photo). See the Montazah palace and Gardens (Salamlek palace, Haramlek palace, a garden of 317 acres of huge trees and flowers, two 5* hotles-Helnan and Salamlek). And then you drive to visit Pompay's Pillar. It was constructed in honor of the Emperor Diocletian at the end of the 4th century. Originally from the Temple of the Serapis, it was once a magnificent structure rivaling the Soma and the Caesarean. Then you drive to visit the Catacombs which are the largest Roman Cemetery consisting of three levels cut in the rock.
Lunch at local restaurant in Alexandria
Then you drive along the Cornish to see the whole city passing over bridge of stanly land mark of modern Alexandria
and then we proceed to see the Qaitbay Citadel which was built on the site of the ancient pharaohs (lighthouse) of Alexandria then to Bibliotheca Alexandrina. ). and Then you drive to visit best sites in Alexandria Start with NEW library of Alexandria (The Bibliotheca Alexandrina ) the biggest library in the world now with 8 million books, Site of lighthouse one of the seven wonders of ancient world Finally you will drive back to your hotel in Cairo.

After breakfast in hotel, our representative will pick you up from the hotel and transfer you to the Airport for the final departure. 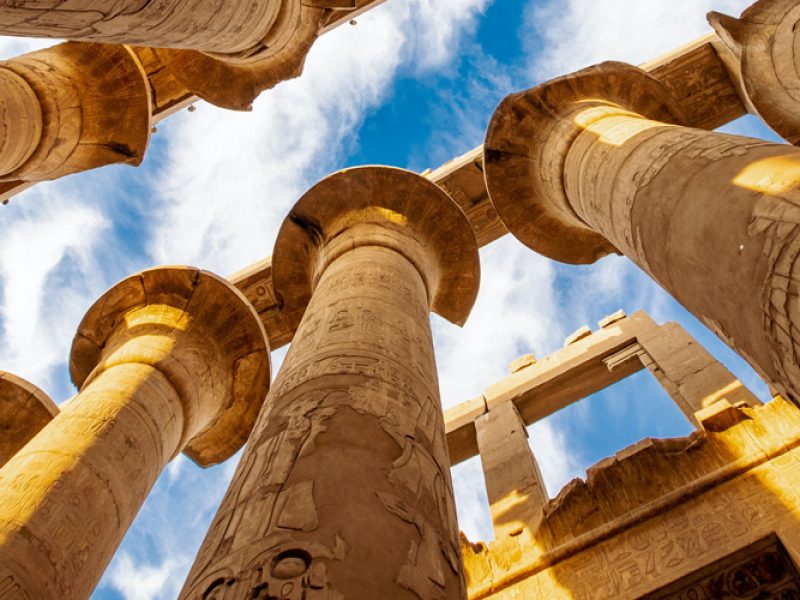 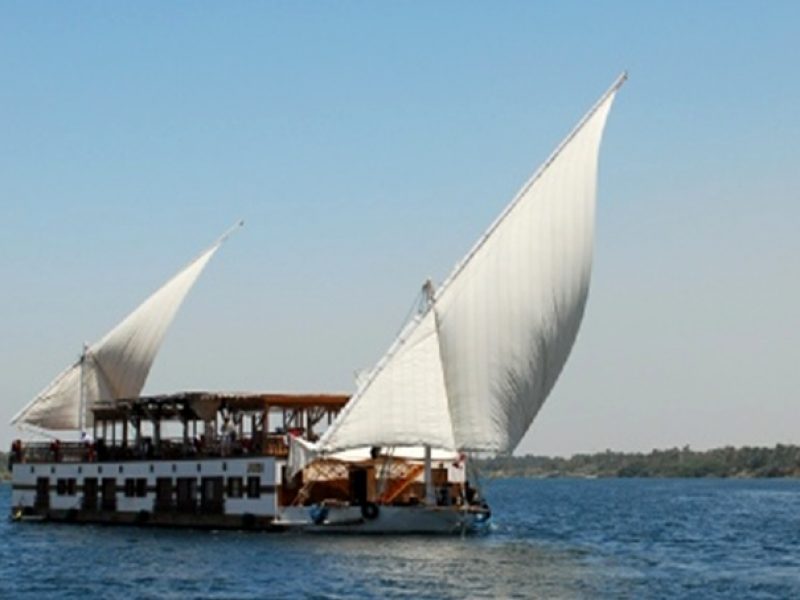 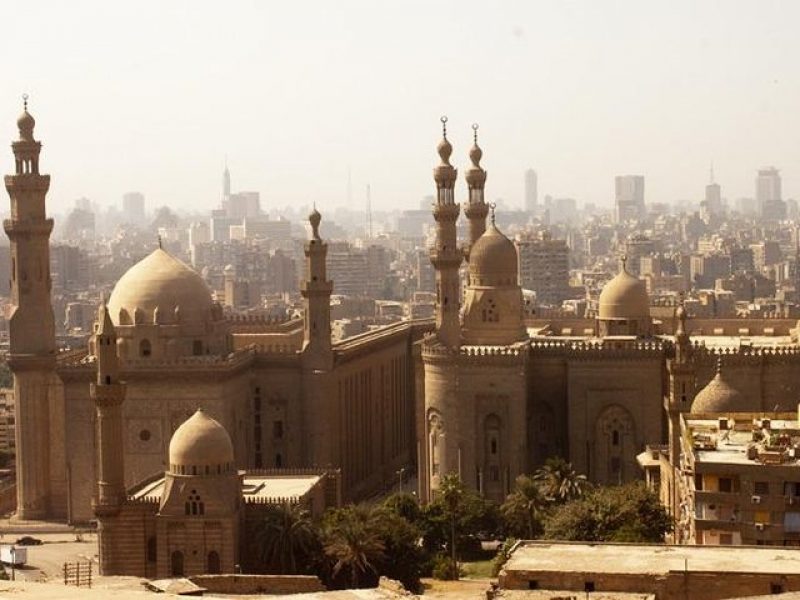 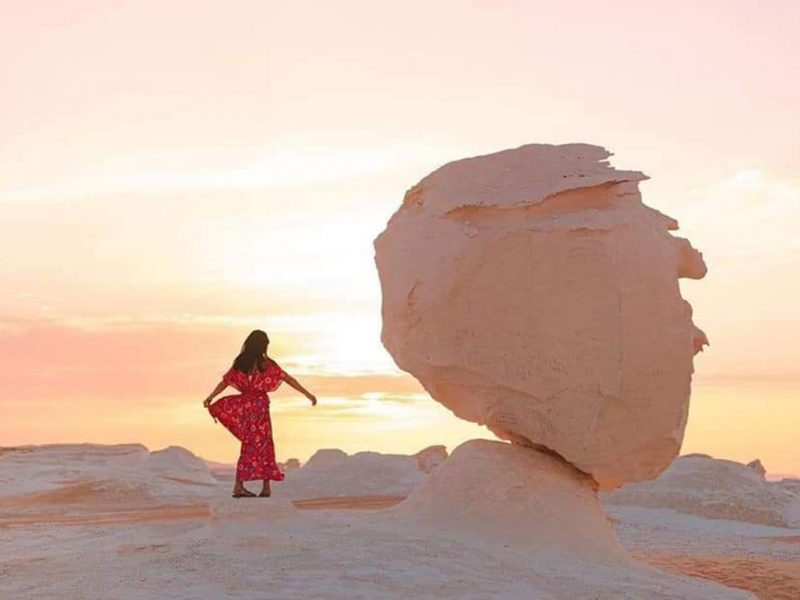