Discover the ancient world of the pharaohs in one of the best Egypt tours visiting the Pyramids of Giza, Sphinx, Egyptian Museum in Cairo, Saqqara, Memphis exploring the temples and ancient monuments in Luxor including Karnak Temple in Luxor, Luxor Temple, Mortuary Temple of Hatshepsut in Luxor (Deir el-Bahari), Colossi of Memnon in Luxor, Valley of The Kings in Luxor.

Arrival to Cairo airport, our representative will be waiting for you at the airport with a sign "Ancient Egypt Tours with your name written on it" he will assist with arrival procedures, you will be transferred to the hotel with a private air-conditioned vehicle assisting you with check-in procedure. Then a quick review with the trip program (pick up times and places).

Breakfast at your hotel in Cairo and then met your personal guide who will accompany you to Giza Plateau to visit the three Pyramids of Cheops, Chephren and Mykerinos and the great sphinx which consists of human Pharaonic head and lion body, continue to visit the Valley Temple in front of Sphinx dedicated to king Chephren, Proceed to have your lunch at local restaurant, Transfer to visit the Egyptian Museum which exhibits a wide range of unique Pharaonic antiquities in addition to original treasure room of King Tutankhamen, gold and jewelry, which dates back to more than 3500 years before explored. Back to hotel.

Breakfast at hotel, our tour guide will pickup you from your hotel to start your day tour with visit the Step Pyramid of Zoser, the world's oldest major stone structure. It was built in the 3rd Dynasty (around 2630 BC) for King Djoser, the museum of I mhotep, the tomb of a high official, the pyramid of king titi, the pyramid of king unas
After that transfer to Memphis, which was founded by King Menes, and was the capital of Old Egypt during the Old Kingdom, it was considered to be a center of rule and culture for over 3000 years the first capital of Egypt, The city reached a peak of prestige under the 6th dynasty as a centre for the worship of Ptah, the god of creation and artworks. The alabaster sphinx that guards the Temple of Ptah serves as a memorial of the city’s former power and prestige. The Memphis triad, consisting of the creator god Ptah, his consort Sekhmet, and their son Nefertem, formed the main focus of worship in the city. Memphis declined briefly after the 18th dynasty with the rise of Thebes and the New Kingdom, and was revived under the Persians before falling firmly into second place following the foundation of Alexandria and see the Statue of RamsesII-16 meters high, the alabasrar sphinx. Then proceed to have your lunch at local restaurant. you will be Transfer to the train station for your overnight Sleeper train to Luxor.

Breakfast on the train, Arrival, meet and assist by our representative.
Start your Tour to visiting the West Bank of The Nile River you will be visiting the two colossal statues of Amenhotep III Colossi of Memnon are the two massive stone statues of Pharaoh Amenhotep III. For 3,400 years they have sat in the Theban necropolis, across the River Nile from the city of Luxor. The original function of the Colossi was to stand guard at the entrance to Amenhotep’s memorial temple or mortuary temple.
Excursion to the Necropolis of Thebes, on the Eastern bank, Crossing the Nile, then visit the Valley of the Kings was created and used from approximately 1539 BC to 1075 BC. It contains some 60 tombs, starting with Thutmose I and ending with Ramses X or XI. The official name of the site was The Great and Majestic Necropolis of the Millions of Years of the Pharaoh, Life, Strength, Health in The West of Thebes, or more usually, the Great Field. The most famous tomb is KV62, the Tomb of King Tutankhamun. The discovery of King Tut’s tomb was made by Howard Carter in 1922. Tutankhamun’s tomb was the first royal tomb to be discovered that was still largely intact, you will visit 3 tombs, Proceed to have your lunch at local restaurant.
You will continue to explore then transfer to the Mortuary Temple of Queen Hatshepsut at El Deir El Bahary, Queen Hatshepsut was the first great woman in recorded history: the forerunner of such figures as Cleopatra, Catherine the Great and Elizabeth I. The Mortuary Temple of Hatshepsut is the focal point of the Deir el-Bahri complex of mortuary temples and tombs located on the west bank of the Nile, opposite the city of Luxor. Hatshepsut was female pharoah. Her temple, this temple was built on three surfaces take the form of balconies, devoted primarily to the worship of the god Amun, and to perform funeral rites for the queen known as El Deir El Bahary, back to hotel.

Early morning, enjoy a relaxing breakfast in your hotel in Luxor and then you will enjoy visiting the East Bank of The Nile River you will be visiting the at Karnak Temple the largest place of worship ever built. In ancient Egypt, the power of the god Amun of Thebes gradually increased during the early New Kingdom, and after the short persecution led by Akhenaten, it rose to its apex. In the reign of Ramesses III, more than two thirds of the property owned by the temples belonged to Amun, evidenced by the stupendous buildings at Karnak. Although badly ruined, no site in Egypt is more impressive than Karnak. It is the largest temple complex ever built by man, and represents the combined achievement of many generations of ancient builders. The Temple of Karnak is actually three main temples, smaller enclosed temples, and several outer temples located about three kilometers north of Luxor, Egypt situated on 100 ha (247 acres) of land. Karnak is actually the sites modern name. Its ancient name was Ipet-isut, meaning "The Most Select (or Sacred) of Places"., The Karnak is connected to Luxor Temple via an impressive avenue of sphinxes.
Proceed to have your lunch at quality restaurant
and then you will be accompanied by your tour guide to visit the majestic Luxor temple which was built by Amenhotep III and Ramses II for ritual and festivals and dedicated to the god Amun with some free time for shopping in Luxor, Transfers to the train station for your overnight Sleeper train to Cairo, Dinner on the train .

Transfer by car from Cairo to El Bahariya Oasis (385km/ 4 hours) check – in and local tour until sunset. Hot spring and. Dinner.

Breakfast and departure on a half asphalt / half of road day trip to black and white desert by land Cruiser, including lunch – picnic. Sunset at the white desert and Dinner.

Breakfast at hotel, our representative will pick you up from the hotel and transfer you to the airport for the final departure. 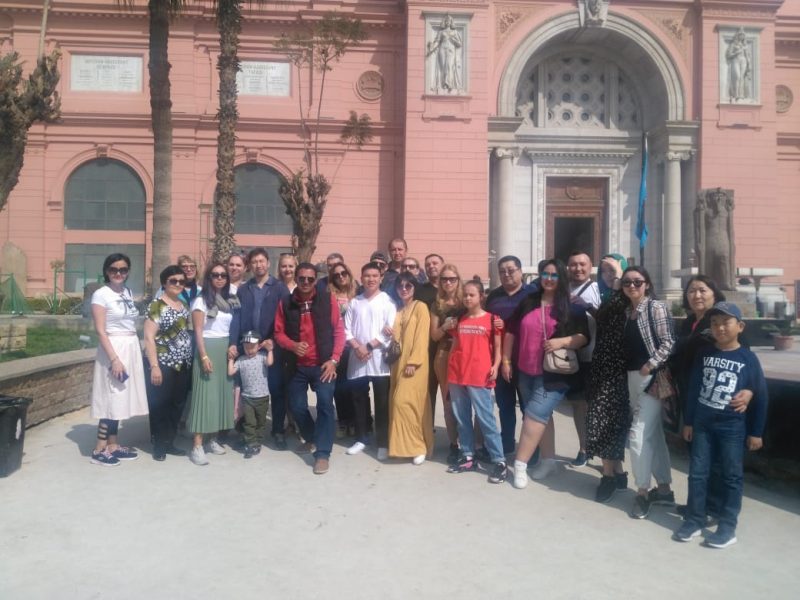 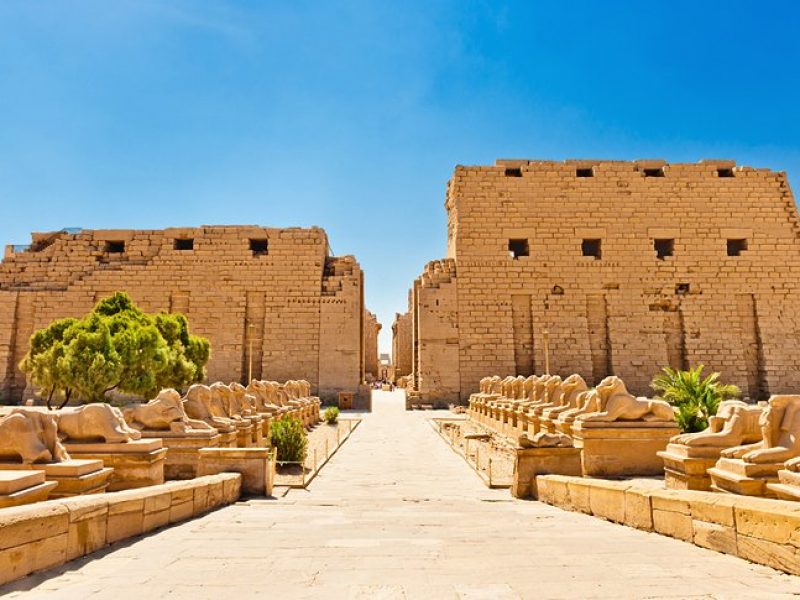 Tour to The East & West Bank 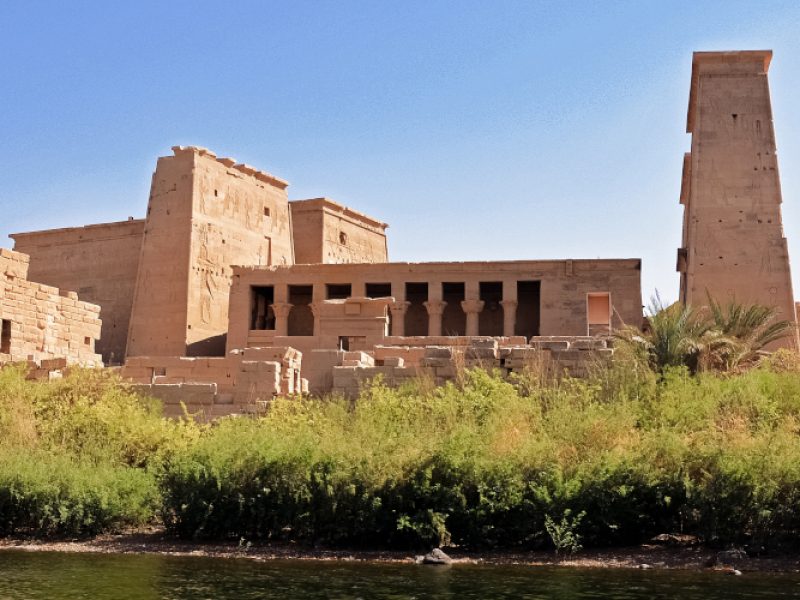 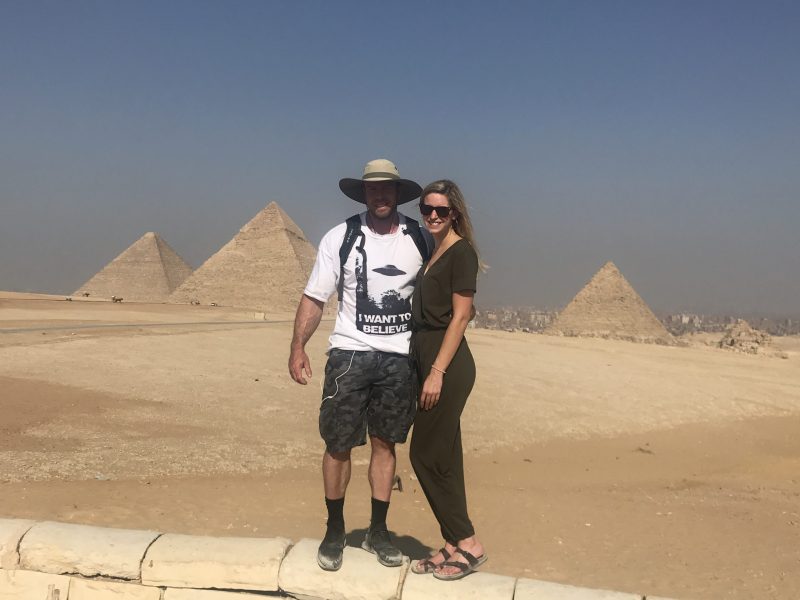